Otis and Dorothy Shepard were the original ad-man and ad-woman design powerhouse of the 1930s. This dynamic duo brought a unique American aesthetic to European modernism while reshaping both design and advertising norms. During the 1930s, they were responsible for developing a holistic design aesthetic for Catalina Island under the sponsorship of PK Wrigley.

Designer Otis Shepard, or Shep as he was called, was born in 1894 in Smallville, Kansas. He left home at the young age of 12, when he traveled to El Paso, Texas, finding work as an errand boy at an engraver’s shop. The young nomad continued on to California to live with an uncle who owned a vineyard in Napa Valley – but the life of a vintner wasn’t for him. He relocated to San Francisco less than a year later where he found work drawing cartoons for the San Francisco Tribune under the guidance of Bud Fisher of Mutt & Jeff cartoon fame. At some point shortly thereafter, he apprenticed with an area lithographer, and by 1912 was able to hang out a shingle of his own. He signed on with the outdoor advertising firm Foster & Kleiser in 1917, where he spent a year before heading off to war. 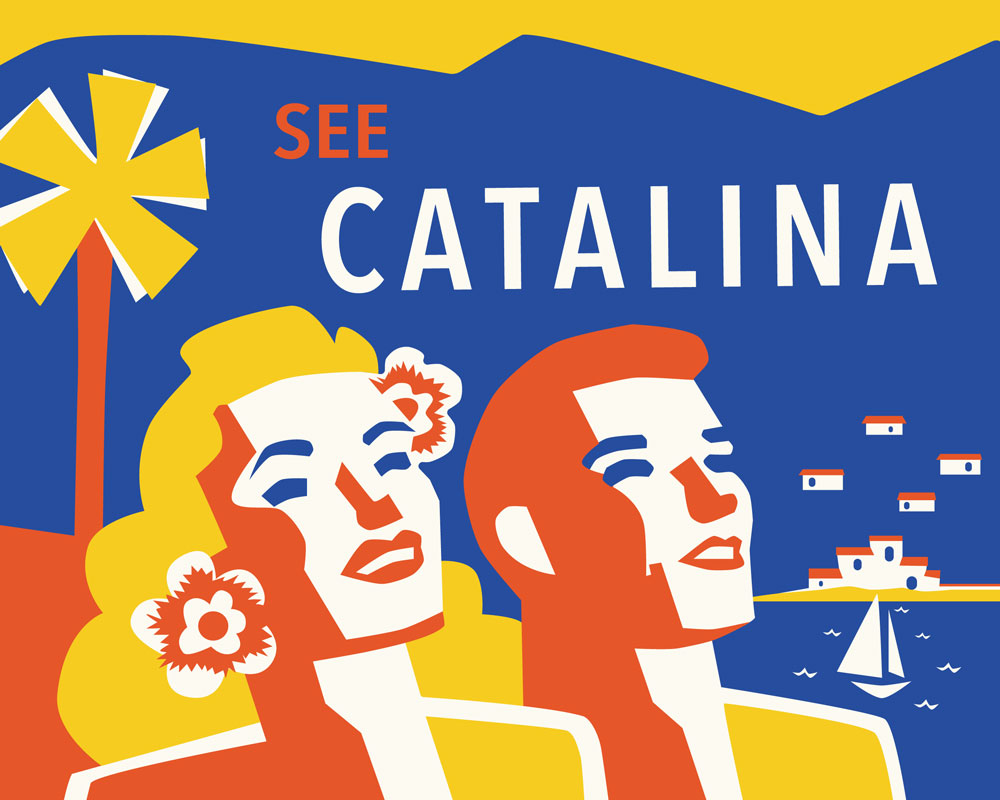 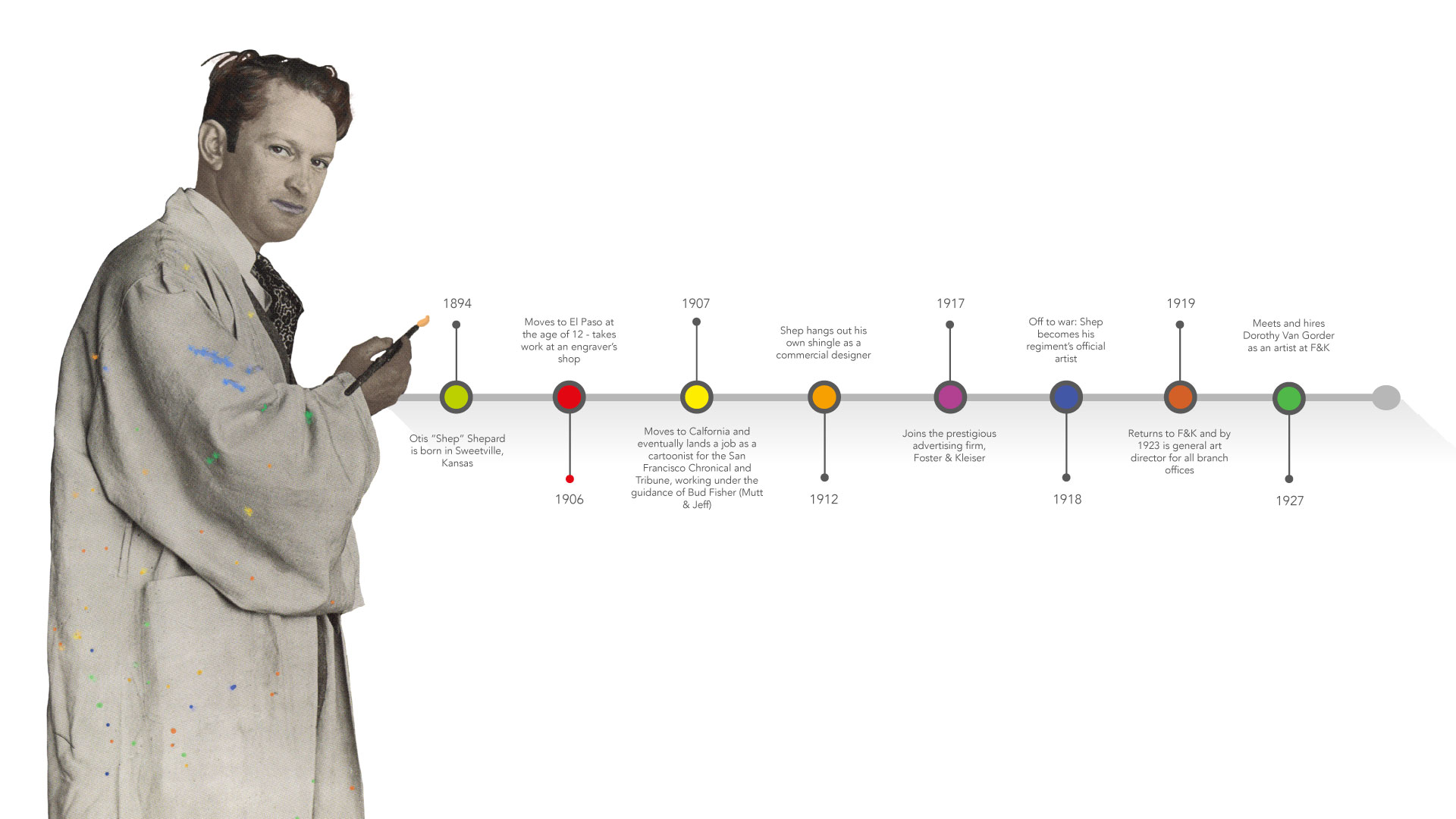 Shep quickly became his regiment’s official artist, visualizing aerial field surveys and capturing scenes of daily life. By the end of the war in 1919, he returned to his position at Foster & Kleiser, rapidly moving up the ranks to take over as general art director for the firm.Looking for additional talent, Shep is introduced to Dorothy van Gorder and hires her.

Dorothy Van Gorder was born in 1906 in Berkeley, California. Somewhat of a prodigy and Bohemian free spirit, she graduates from high school as valedictorian at age 16. She continues on to the California School of Arts & Crafts, graduating (again as valedictorian) in 1927. After a year of designing costumes for a well-known avant-garde dance troupe, until she meets Shep and lands a position at Foster & Kleiser. Foster & Kleiser was founded in 1901 and specialized in outdoor billboard and building advertising. With the passing of the Federal Highway Act in 1921, which increased national spending on roads, there was a boom in the automobile industry and to quote, “outdoor advertising became the broadcasting system of its time.” Because of their already prominent position as an outdoor advertiser, Foster & Kleiser had what amounted to a monopoly on roadside billboards. 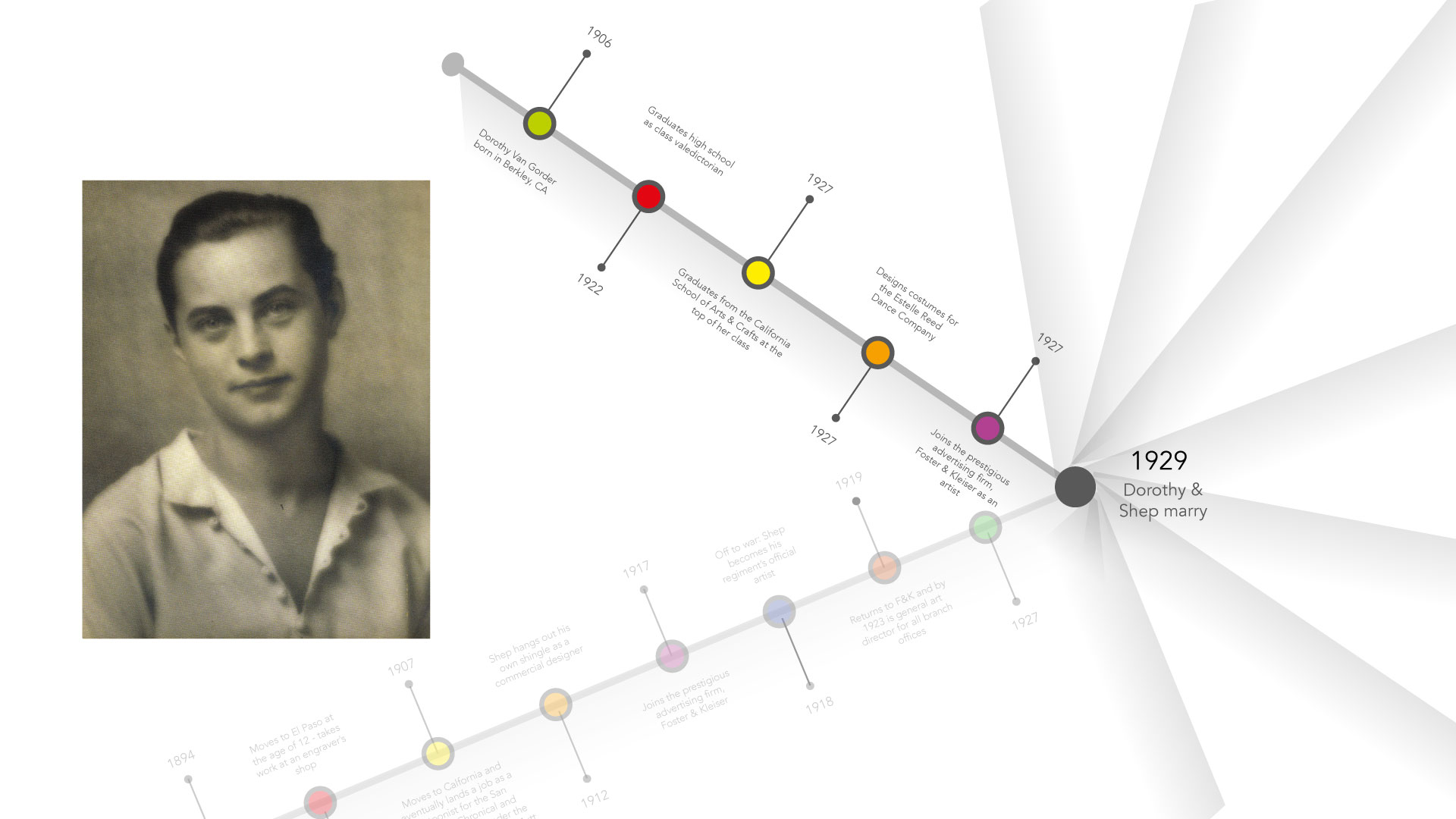 Shep and Dorothy honeymooned in Europe, taking the time to meet the renowned modernist designer Joseph Binder. Binder was known for stylistic elements in his designs, particularly the reduction of images into shapes, airbrushing – which gave the artwork luminescence – and the integration of typographic elements. The pair were enamored by modern design and invigorated by their trip to Europe, bringing the design aesthetic back to their US practice. For Shep, this represented a shift from “painterly realism” (Hathaway & Nadel, 2014) to a distinctly modern style. Inspired by Binder, Shep becomes one of the first US designers to use the airbrush as his primary tool.

“I am interested in symbolism. The artist who works in the modern style works in symbols of one kind or another, either intellectual, such as words and phrases; literalistic, representations of the photographic kind; or subconscious symbols, getting his effect through an appeal to to certain mental reactions without the realization of the onlooker.

The modern approach differs from the traditional method in that it makes greater use of the latter kinds of symbols. Certain combinations of line and color that speak an almost primitive language, which express dramatic action and appeal to the intuitive emotions – these are the materials used in the symbolic methods today.”

In this quote from a 1929 interview, Shep talks about his interests in symbolism which heavily influence not only his, but Dorothy’s work. Throughout his extensive design career, he rarely strays from this symbolic modern style. 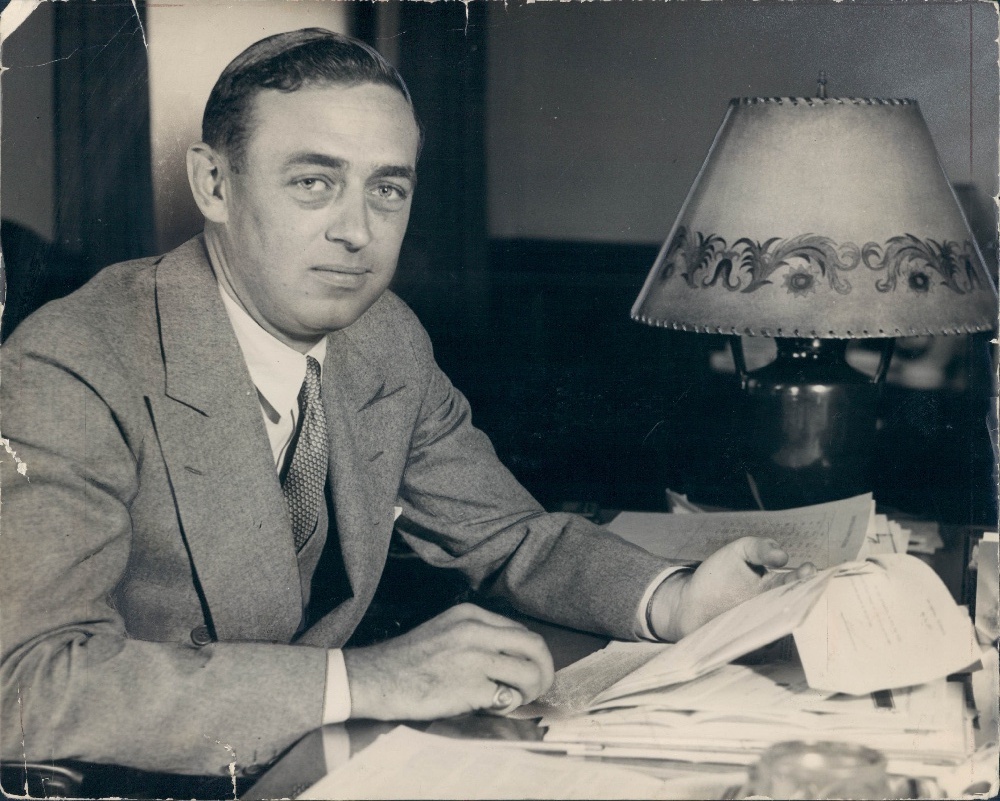 By the early 1930s, the Shepards were widely considered to be at the top of their field in American ad design. The couple set off on their own and continued to produce billboards for big brand companies. In 1932, Shep met with PK Wrigley, owner of the Wrigley chewing gum empire, to show him some designs. Wrigley was so impressed with his work that he hired Shep on the spot. It was a partnership that would last throughout Shep’s life. Shep designed everything around the Wrigley brand, including the gum wrappers, matchbooks, outdoor advertising, pamphlets, counter displays – if it said Wrigley on it, Shep designed it.

Shep’s guideline for successful advertising was that the audience should understanding the meaning of the ad in less than five seconds. Across all of these advertising pieces, we see the consistent application of his key themes: flat color, airbrushing, and minimal text – something that he used to argue with PK Wrigley about. But sales were soaring thanks in large part to the Shep designed advertising campaigns, and Wrigley mostly let him have his own way. Shep introduced the Doublemint twins in 1939, an advertising theme that has endured to modern day. In fact, Shepard’s package design for Doublemint gum remained basically unchanged until 2002. 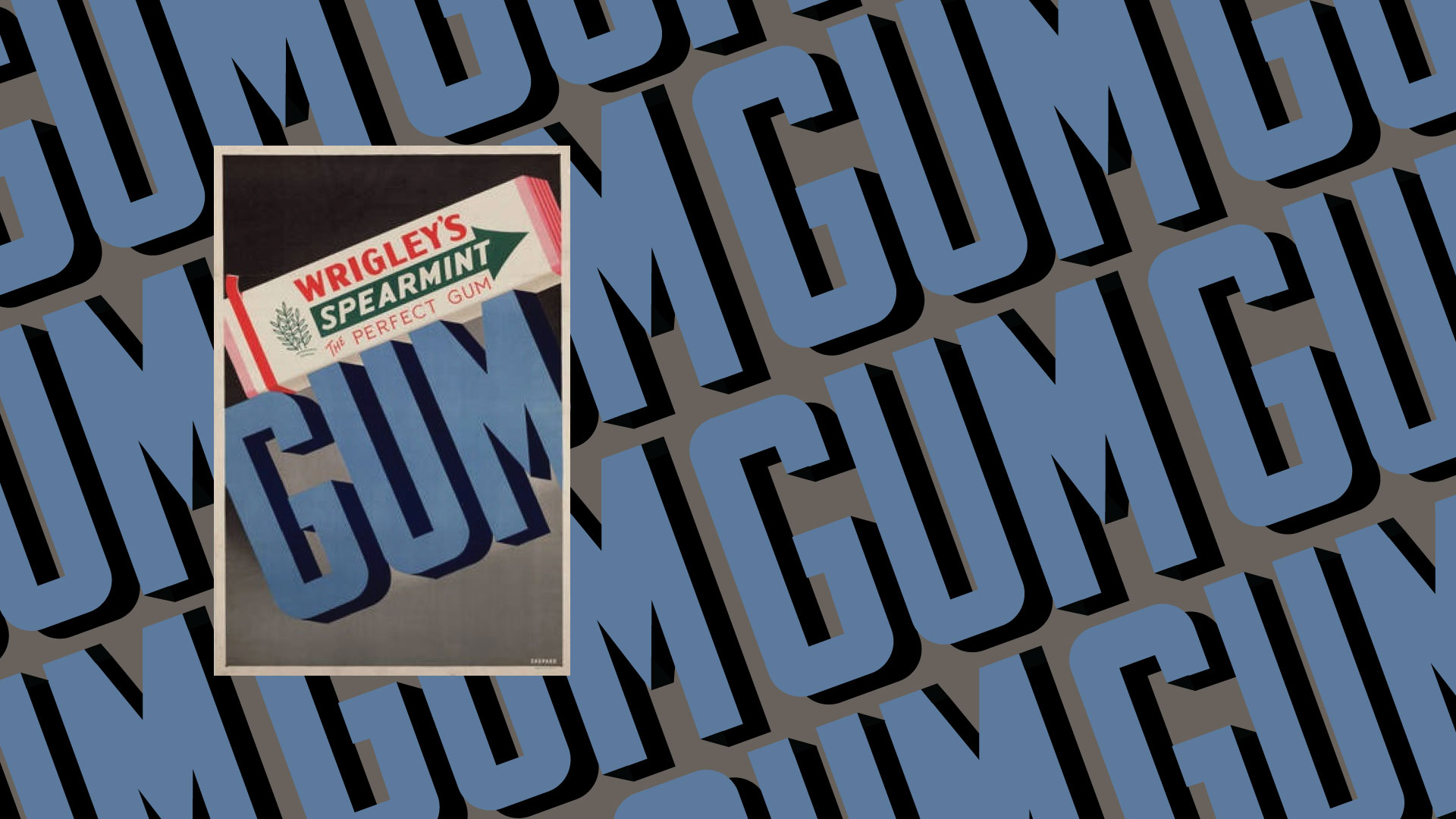 In 1932, upon the death of his father, William Wrigley, PK inherited the beautiful island of Santa Catalina, as the song says, just a 26-mile boat ride from Los Angeles. His father’s goal was to create a resort paradise. One of the first things PK did was hire Shep, who took on the responsibilities of creating a vision to promote tourism on the island.  Dorothy and Shep lived on the island for four years, and the pair not only created promotional print materials, such as the brochure covers, luggage labels and matchbook covers you see in these photos, but also landscaping for resort properties, road signs, and uniforms for employees. One of Shep’s objectives was to unify design and create a graphic identity for the island, a style he called the “Early California Plan” (Hathaway & Nadel, 2014) – a blend of the popular 1920s and 30s California Revival style, which was heavily influenced by Spanish, Mexican and Native American influences, and his own modernist ideals. His interpretation of this design style was dominated by a bright color palette of blues, reds, oranges and yellows. If you compare the Catalina work with the Wrigley Gum advertising, you’ll notice that consistent modernist design theme, with all the warmth of the California sunshine. 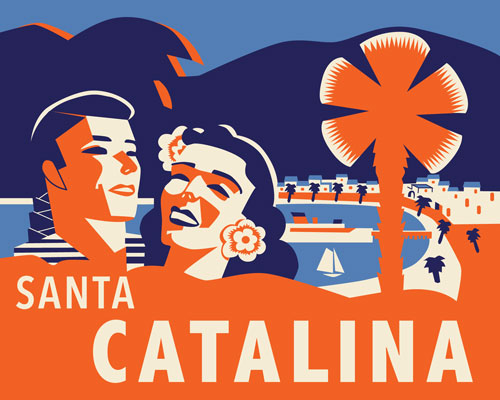 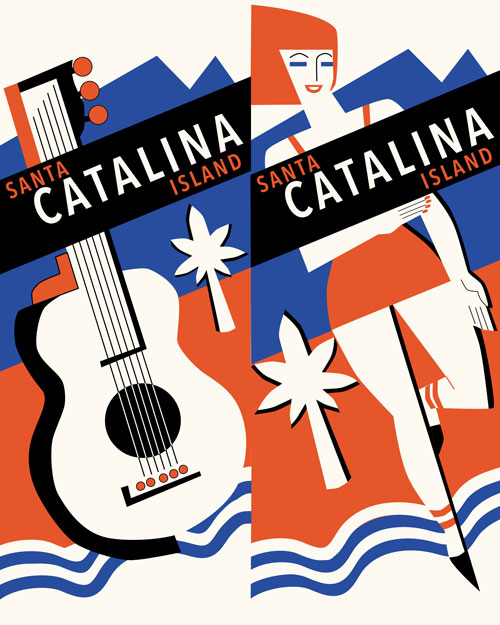 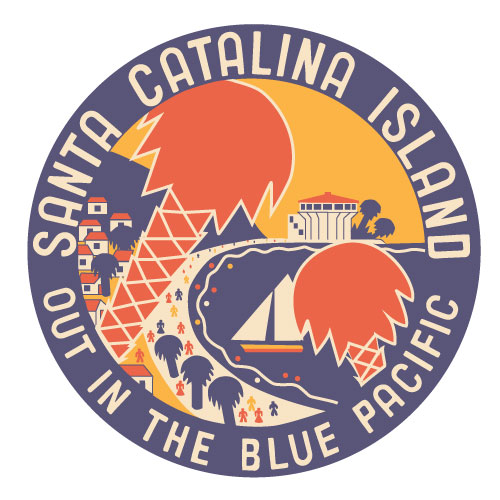 During the mid 1930s, when Shep was leading the design efforts of both Wrigley Gum and Catalina Island, PK leaned on him once again – this time to create designs for Wrigley’s beloved ball team, the Chicago Cubs. Around 1936, Shep began to redesign the team uniform. With the uniforms complete, PK sent him off to redesign the all aspects of the stadium – like the work on Catalina, the objective was to create a whole graphic identity for the ballpark. This is perhaps one of the first forays into creating what we call today, “the customer experience.” In fact, his work was so popular, that the National League commissioned him in 1951 to create the 75th anniversary uniform shoulder patch worn by all teams. Shep continued his relationship with the team until the early 1960s. 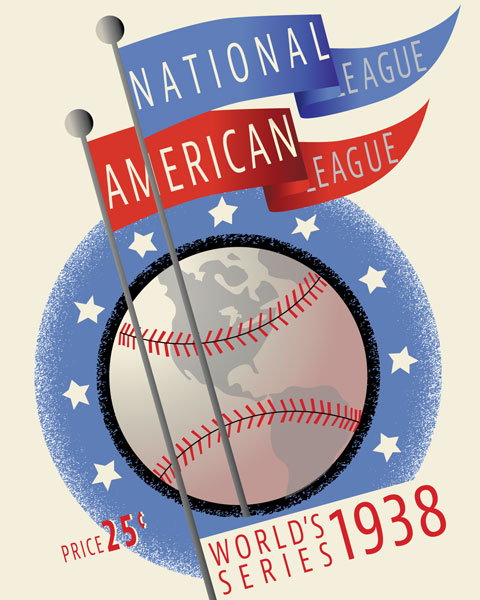 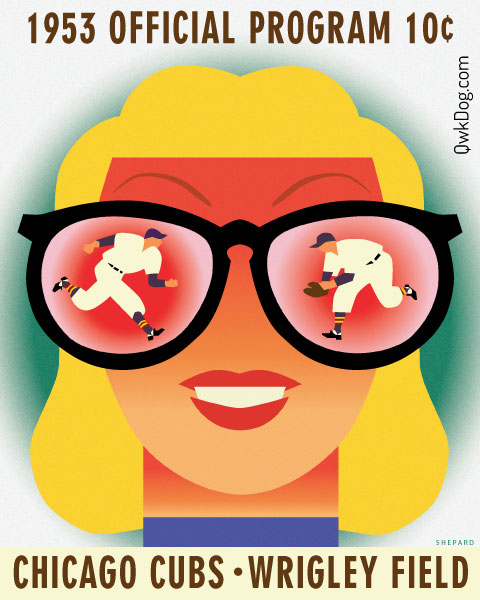 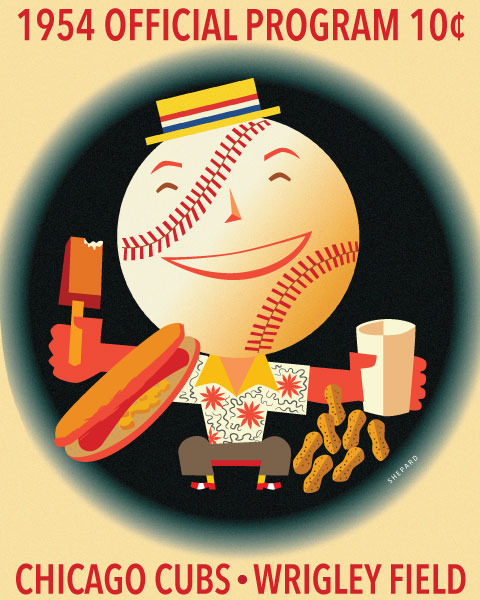