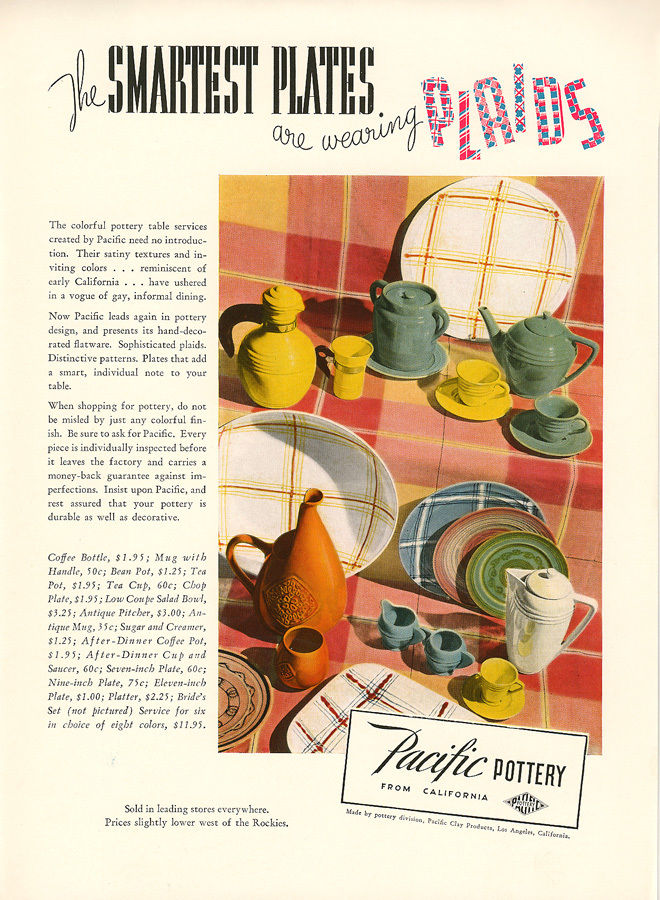 Pacific’s BG plaid pattern was one of the most popular decorated designs produced by the company.

BG represents an incongruous mash up of styles: a traditional plaid design married to an Art Deco-styled dinnerware line glazed in bright Mexican/Spanish Revival-style colors. While today we might revere the “modern” style inherent in Hostessware’s overall design, it’s important to keep in perspective that Colonial Revival was the prevailing design and decorating theme of the 1930s. Plaids in particular were insanely popular, although we don’t see them catching on in other dinnerware lines until the 1940s and 50s. Most prevalent is Vernon Kilns, who produced at least a dozen variants of plaid patterns on the Montecito shape. Even after Vernon went out of business in 1958 and sold their molds to Metlox, Metlox continued to produce the Organdie and Homespun plaid lines well into the 1960s.

BG is both a nod to the traditional and the modern. As one of Pacific’s most popular decorated patterns, you can find it in a wider variety of pieces. Pacific bundled BG into a “Salad Set” featuring the #310 9″ footed salad bowl, 6 #610 7″ salad plates, and a pottery-handled fork and spoon set (according to company literature, the set was available in red, white, yellow, and green on BG, 2007, and 2008 patterns). I have the Salad Set in BG red, purchased from a Southern California Craiglist listing (a man was cleaning out his aunt’s estate and found them buried in a back cupboard). To date, there have been no sightings of the fork and spoon.

Like all decorated ware, there are many varieties of stripes and colors. No one piece is the same! While this pattern needs no introduction for identification, most pieces are either hand inscribed or stamped with the BG pattern name.