Modernist architect and industrial designer Morris Sanders designed Franciscan Metropolitan for a 1940 exhibition, 15th Contemporary American Industrial Art at the Metropolitan Museum of Art.  The Museum began this series of exhibits in 1917, featuring the work of notable “designers and makers.” The committee responsible for the exhibit in 1940, included luminaries such as Gilbert Rohde, Walter von Nessen, Russel Wright, and Raymond Loewy.

“This year the Metropolitan Museum will present its fifteenth comprehensive exhibition of Contemporary American Industrial Art. Like the others in the series, which began in 1917, the exhibition will consist of house furnishings. All the pieces included by been designed and made in the United States by permanent residents of this country and, with the exception of structural materials and plain goods, none has been publicly shown before.

It is always of decided interest to the Museum to show the work of as many designers and craftsmen as possible. Though the Co-operating Committee numbered only twenty-two, the unselfish assistance of its members brought the total of designers and craftsmen to 170. The objects and materials exhibited total far in excess of a thousand and were produced in twenty-one states by 409 firms and individuals…The exhibition of 1940 shows together, as they are used in daily life, the products of craftsmen and those of quantity-producing industry.”

The exhibition brochure lists three “Metropolitan” pieces in the display: a teapot and two plates. Each plate featured a design, one by Witold Gordon and the other by Joan Kahn. Unfortunately, no detailed photos are available. In the photo, you can see the dinnerware on the left hand side in the middle display. Also featured in the display is a bowl and platter designed by Mary K. Grant with a glaze by Max Compton for Gladding-McBean.

GMcB made the line available for regular production from 1940-42. The line only has around 15 separate pieces, but includes standard dinnerware and coffee/tea service pieces. The coffee and teasets are fairly common. All Metropolitan was produced in satin duo-tone glazes with ivory on the interior and lids. Contrasting colors included coral, turquoise, gray, mauve, yellow, and pink. The line was also available in single-tone ivory. While Metropolitan was only produced for a couple of years, the shape was recycled and expanded in the late 1940s in their solid-color Tiempo line and later in Trio. 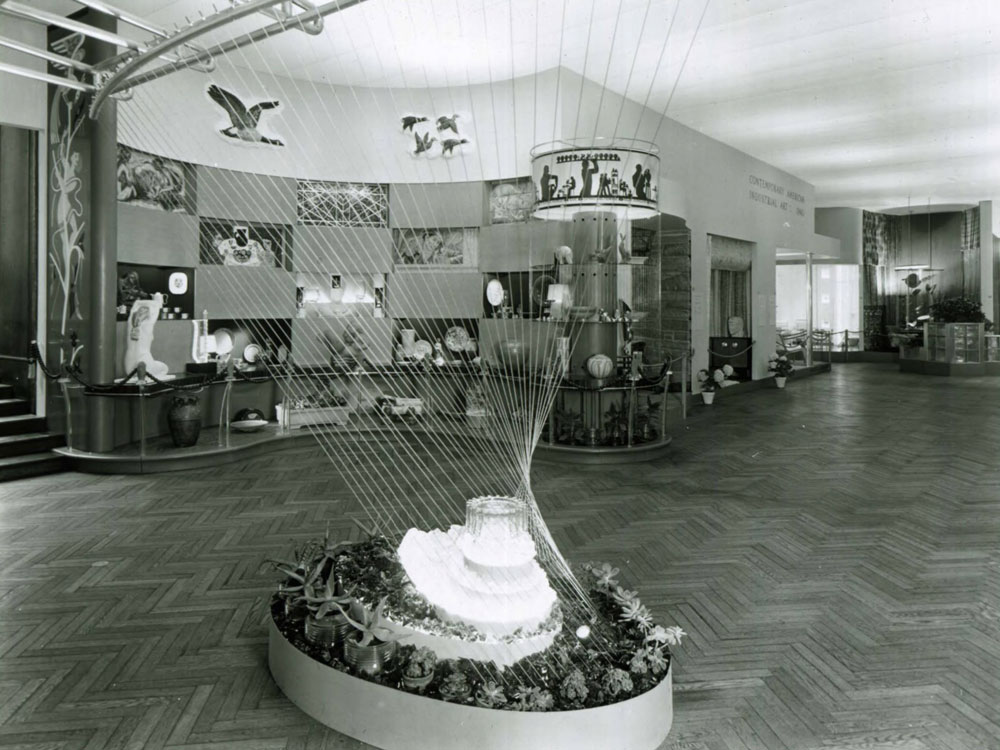 The Franciscan Metropolitan display is on the far left side on the center shelf.