By 1928, Pacific started to see decreased demand for commercial pipe and tile as the housing market slowed and major sewer pipe projects in Los Angeles neared completion. In their annual report, the company notes the over-expansion of the clay products industry, resulting in excess capacity in southern California.

With increased competition and their margins under pressure, Pacific begins focusing on manufacturing efficiency in their plants and also introduces consumer ware: kitchen stoneware, bowls, jars and jugs, and ornamental garden pottery, as distinct product lines.

1930 marked a record low in building and Pacific’s manufacturing facilities operated at dramatically reduced capacity. That year, at a cost of $151,000, the company remodeled the Lincoln Heights plant to dedicate manufacturing to architectural terra cotta and garden pottery. The new department was in full operation by the end of the year. With commercial and industrial production at a standstill in 1931, the popularity of consumer lines grew and Pacific expanded their offerings. In this year, artware emerged as a standalone product line. Hostessware launched in 1932, and the company continued to expand the artware line. 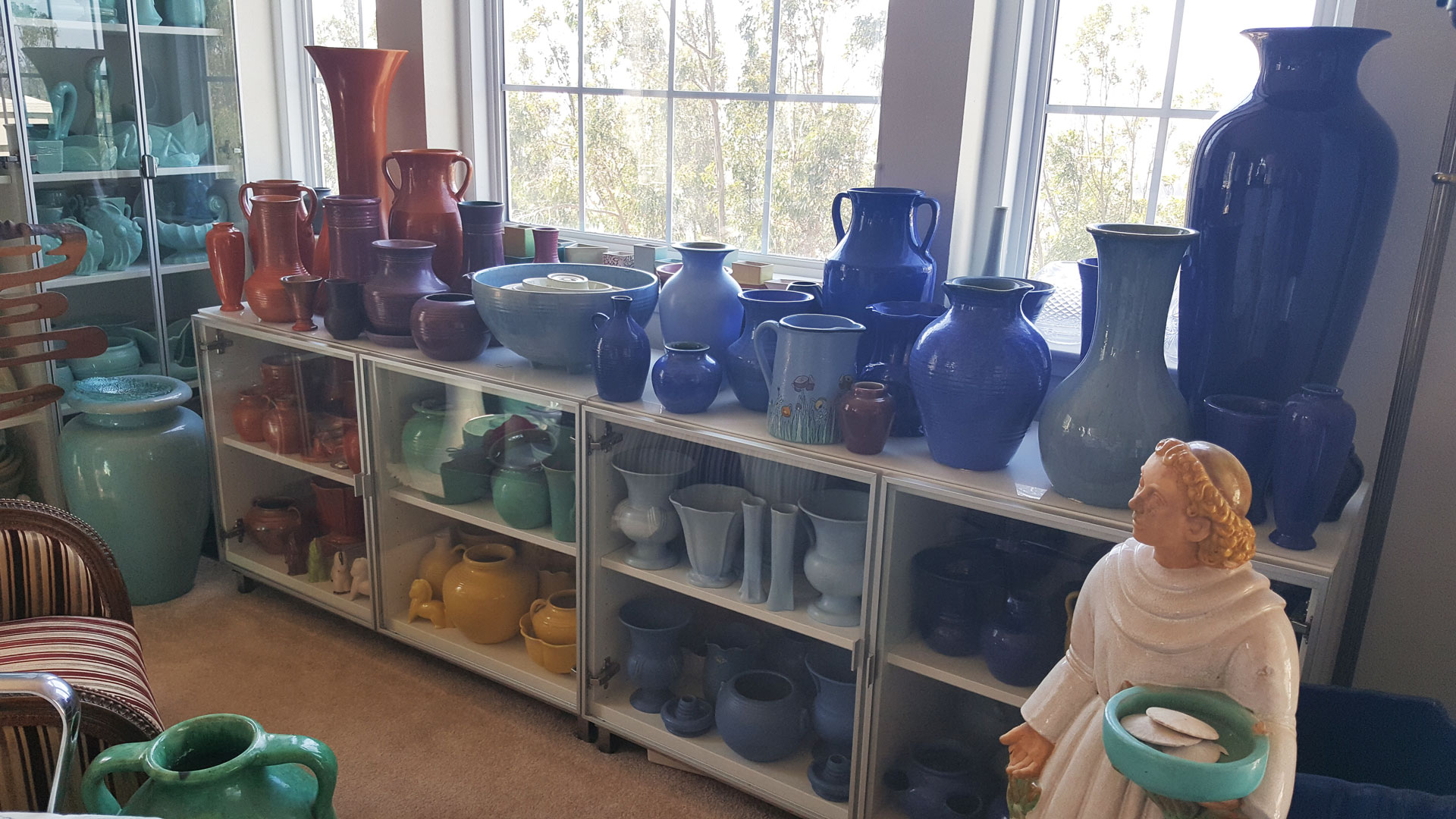 Pacific published an architectural catalog featuring their early garden and artware designs. According to Pacific employee Ken Barrette, “We had a man with a potter’s wheel. When there was a convention of potters, all these independent salespeople would come and see it. They’d ask the potter if they could make a specific item and he’d do it.” Often, he wasn’t even an employee of the company and was only hired for piecework. “No employee produced hand-thrown pottery on a full-time basis.” What we can take away from this is that even if the pottery ended up in the catalog, they were examples that wholesalers could select from and produced to order. If there were no buyers, the one-off pieces were sold to consumers at the company’s showroom. This is the reason that early Pacific artware is extremely rare.

A late 1920 Pacific stoneware catalog illustrates the wide variety of utility and kitchenware. Many area potteries, including Bauer Pottery, Garden City Pottery, and Meyers Pottery, produced a full line of stoneware widely used in area farms. As the farms gave way to more residential development in the 1930s, these stoneware lines disappeared.

Page 12 of the catalog shows the an example with one of Pacific’s “blended” glazes. Workers applied the glazes using spray guns with different color combinations. Catalina Island Pottery also used a similar glaze technique on early art- and gardenware pieces.

A 1997 interview with Ken Barrette reveals more about the artware design process. “We had one of our jiggerman that could operate a wheel in a rough sort of way, but we never made anything commercially on the potter’s wheel. He would produce a sample or two or three of the same thing, one of our glazers would select a glaze for it, and it would be taken out and shown to buyers. If there was any interest in the piece, we made molds for it and either jiggered or cast it.” The original hand-thrown pieces were designed as models, not production pieces. “At the conventions and wholesale houseware shows, the potter would make different shapes all day long and hand them out. The pieces weren’t glazed: Whoever had them would have to take them and glazed them on their own. We [Pacific] used to do lots of glazing for school kids. The ceramic classes in the schools would bring their things in to be fired. We charged for what we did, we didn’t do it for free. Most of the schools used our clay, so we know that it was going to fire and glaze alright.” 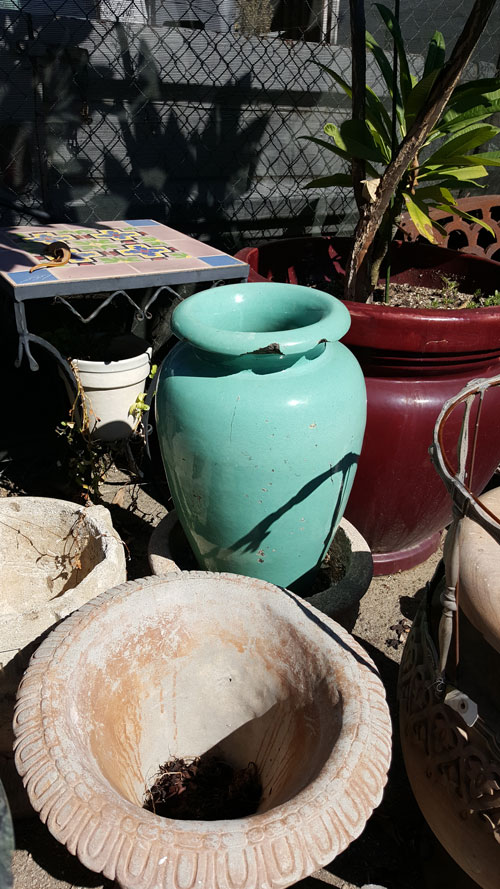 Pacific gardenware vase as found at a Pasadena antique lot

Many people make the mistake of calling all blended vases “Sawtelle.”  However, Sawtelle is very specific to a particular vase which came in two sizes: #530 8″ and #531 9.25″. In 1925, Pacific produced 120 vases for the Sawtelle Veterans’ Home in Los Angeles. The hospital was established in 1887 on 300 acres around Santa Monica and grew several times over the next few decades. In the 1960s, the city of Los Angeles tore down most of the original buildings to build the 405 Interstate highway. What remained of the facility was reincorporated as the West Los Angeles Medical Center veterans’ hospital (good article on the history of Sawtelle here).

Pacific continued to produce the vase for several years, retaining the Sawtelle name. The image below showcases an outstanding array of the larger #531 vases in a wide variety of blended glazes from the collection of June Sakata. 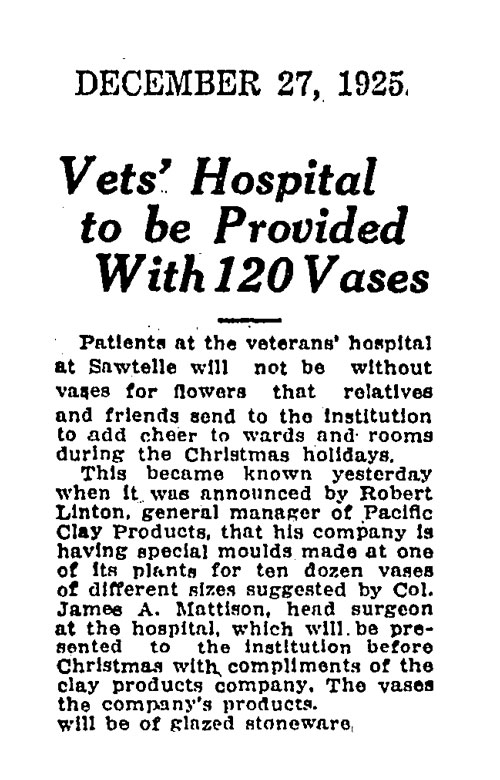 Beyond what you’ll find in the catalogs, Pacific produced an enormous variety of blended glaze pieces. Mixing bowls most commonly show up on sites like eBay, but collectors can find other pieces as well (see what’s currently available here). During the California pottery collecting boom of the late 1990s and early 2000s, blended pieces would command a high premium. Today, the listed prices are still high, but collectors are few and far between. Many of the pieces listed on eBay have been there for years due to sellers overestimating prices in the current market. 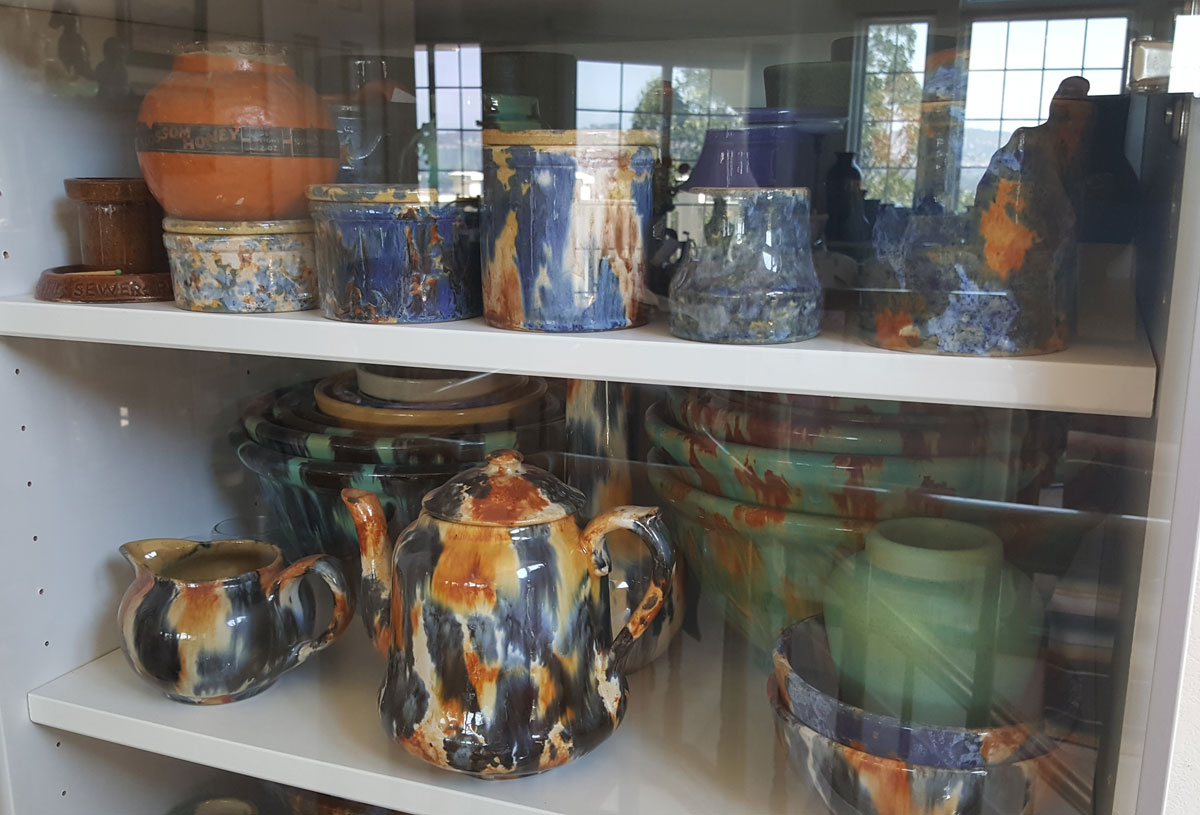 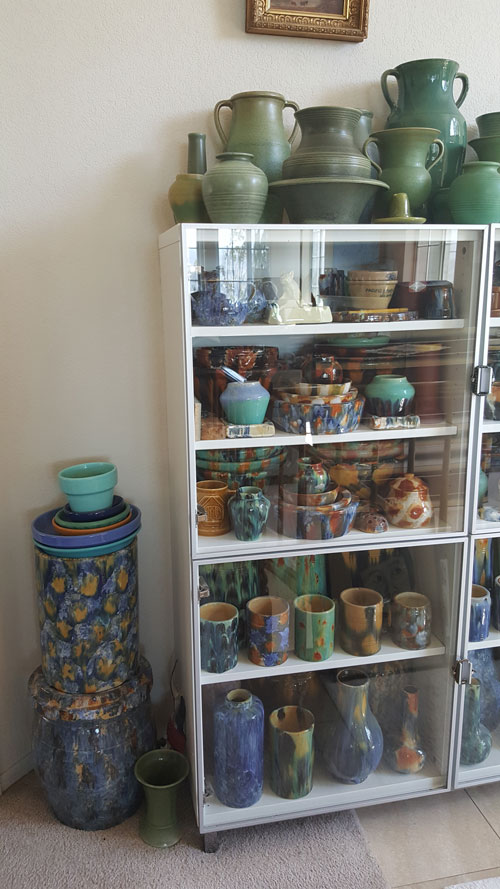 In 1994, collector and dealer Doug Stanton wrote an article for the Journal of the American Art Pottery Association on early Pacific artware. Jim Lattie, son of 1930s Pacific’s sales manager Melvin Lattie, published a rebuttal of the article in a letter to a fellow collector who later passed the letter on to me (at right, click to enlarge).

All company catalogs referenced in the article featuring artware designs are available on the Pacific catalog page. 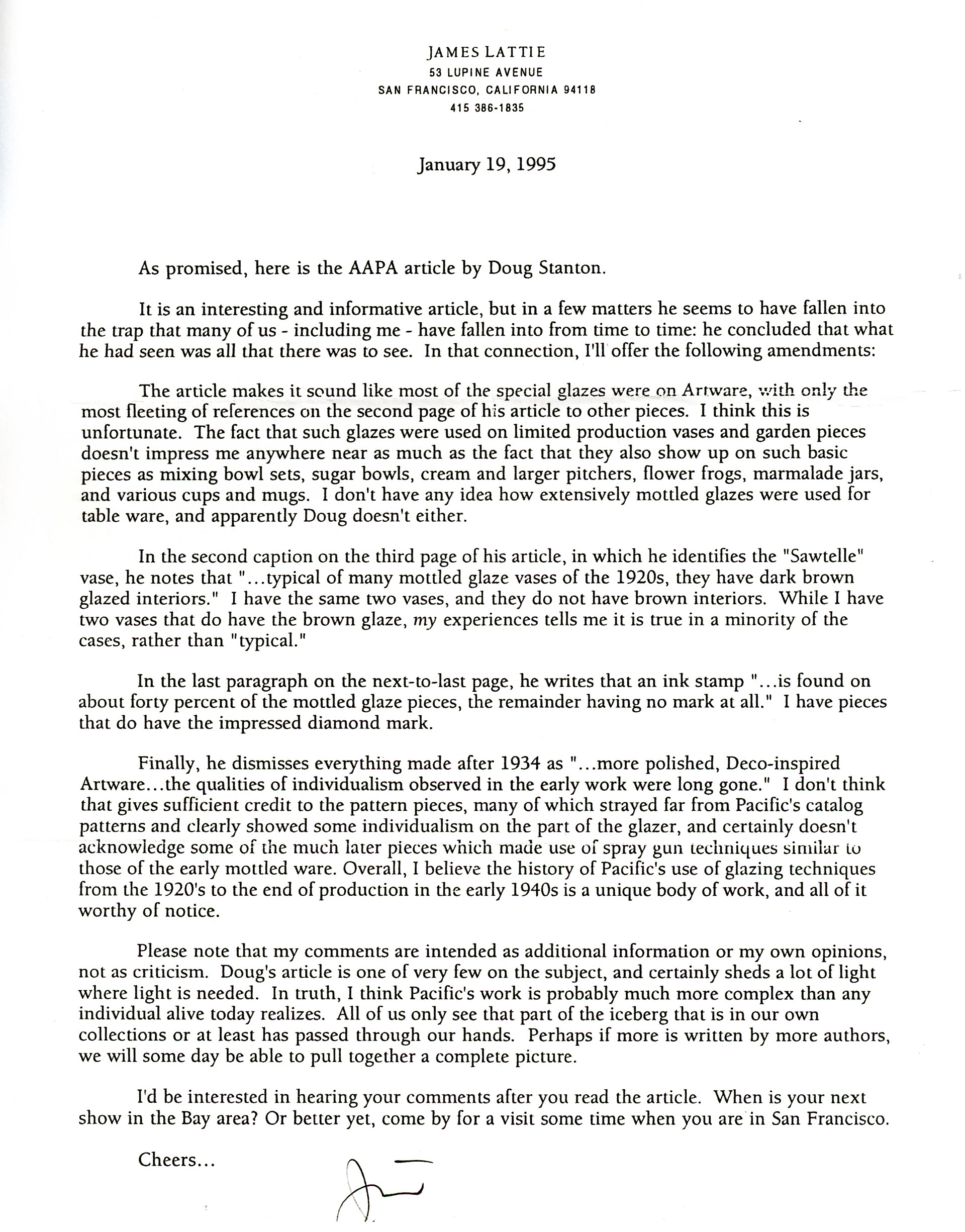