Part of the Channel Island system, Santa Catalina Island lies 22 miles off the coast of southern California. In the late 1800s, General Phineas Banning and his sons realized the potential value of Catalina as a resort destination and began developing infrastructure to support tourism in the town of Avalon. In 1915, a fire at the Hotel Metropole in the main center of Avalon spread quickly, destroying half of the town’s buildings and homes. Due to debt incurred as a result of the fire and decreased tourism, the Banning brothers sold the island property in shares. Industrialist William Wrigley, Jr. (of chewing gum fame) purchased a controlling interest in the island in 1919. Wrigley made significant investments in developing the island. Notable developments include the iconic Catalina Casino, constructed in 1929, as well as ferry boats to bring tourists back and forth from southern California destinations.

The history of tile and pottery manufacturing on the island begins with the discovery of clay and mineral oxides necessary for pottery production while drilling for fresh water wells. The island company imported machinery to a location in Pebbly Beach, a short drive from Avalon, and used clay from multiple island sources to create early brick and tile products. The earliest pottery pieces were produced in 1927 as novelty items, tiles, plaques and bookends featuring Catalina wildlife and Mexican themes. By 1928, some of the items were sold on the California mainland. 1928 also marked the first year that tiles were glazed. The Catalina Clay Products Company was spun off from the original tile factory (1928-32) and operated from 1930-36.

As is common with most pottery companies during the period, a number of skilled artisans and craftsmen were employed, often hopping from one company to another. All the companies benefited from the sharing of information and innovation, but very little information about who worked where when has been documented. We do know that the Catalina plant supervisor, DM Renton, recruited ceramists from Pacific Pottery in 1928 and the blended glazes seen on Pacific pieces during that period appear on Catalina pottery vases, oil jars and other decorative ware. At the start of the Great Depression, the Catalina tileworks scaled back to a skeleton crew. One of the former Pacific ceramicists, Harold Johnson, left Catalina for Bauer, helping them design and launch their new California Colored Pottery line. 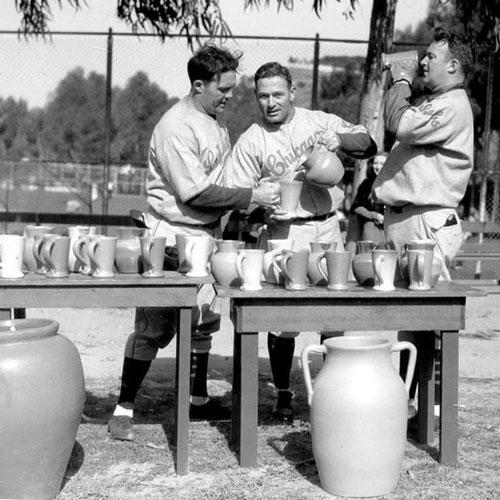 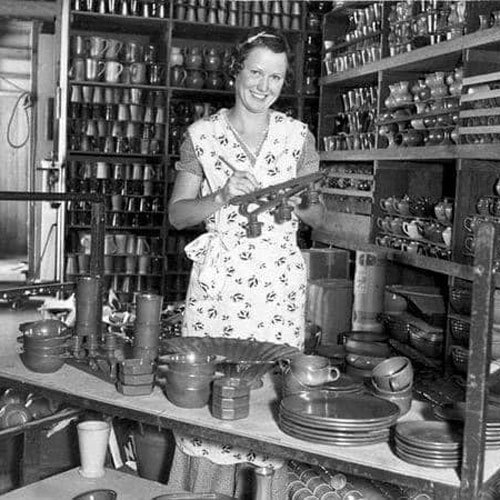 Early Catalina pottery is famous for its redware clay base. While redware was good enough for larger garden and commercial items, white clay was a better fit for dinnerware production (glazes adhered to the surface more easily). As Catalina moved away from tile and gardenware and towards dinnerware, they imported clay from (among others) the Pacific Clay Company’s clay mines in Lincoln, California. Glazes used during the period include: Catalina Blue, Descanso Green, Toyon Red, Mandarin or Manchu Yellow, Turquoise Blue, and Ivory. Harder to find colors include Monterey Brown and Seafoam. Occasionally, collectors will come across Teal, Obsidian Black, and cobalt.

During the 1929-36 period in which Catalina produced tableware, they strove to be known as a “quality pottery” – a line used by many California potteries when faced with intense competition from the Ohio Valley potteries – by only selling in higher-end department stores across the United States. Several lines were offered, ranging in styles from art deco to arts and crafts to Moorish. In 1936, some of the chief architects behind the success of the pottery retired, notably DM Renton, and without a driving force behind the organization the Wrigley company looked for a buyer. Gladding-McBean (GMcB) took possession of Catalina’s trademarks and molds on March 31, 1937 and continued to produce a variety of products using the Catalina brand under their Rancho, Avalon and Aurora Artware lines until 1942. Collectors should note that pottery produced under GMcB is marked as “Catalina Pottery” and original pieces are marked “Catalina Island Pottery.”

These Catalina logo designs are available on a variety of items in my Society6 shop. You can also visit my Catalina portfolio page to see more designs.

Today, you can take a 45 minute ferry ride from Long Beach, San Pedro, and Dana Point to the two Catalina Island destinations, Avalon and Two Harbors. The town of Avalon is full of original Catalina tile both in- and outside shops, homes, and municipal buildings.