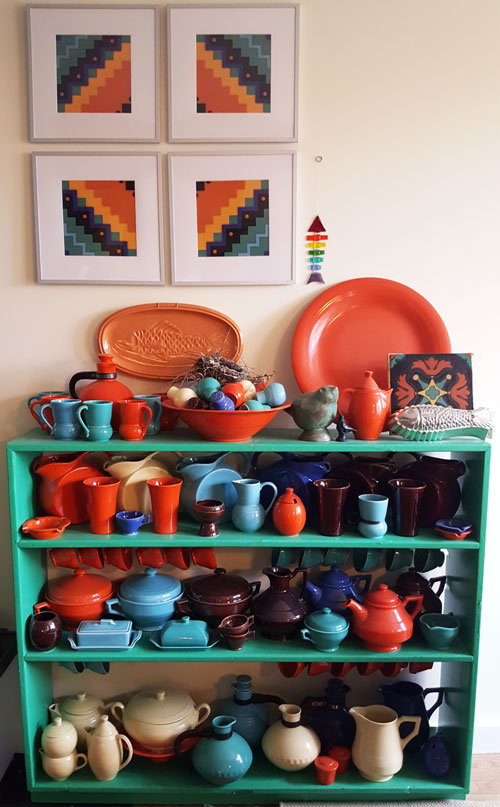 “The colors are truly thrilling!”

Vernon Kilns launched their Early California dinnerware line some time around 1935. Vernon produced Early California line on their “Montecito” shape, believed to be the first shape produced by the company. Throughout the dinnerware line’s comparatively long run, it went through several style changes. Earlier handled pieces, such as cups and beverage servers, feature angled handles. Around 1937-38, with the launch of the pastel version of Early California, called “Modern California,” Vernon rounded out the shapes and applied them to both Early and Modern. The Montecito shape pre-dates Early California, and it’s possible to find early pieces in white (identified by the backstamps below) that fit nicely in the line.

By 1937, the standard glazes included: light yellow, turquoise, green, brown, dark blue, orange (red) and pink. Pieces can be occasionally found in maroon, peach or white. Vernon likely discontinued several colors in the early 1940s due to wartime restrictions on materials and production. The orange-red and green glazes seem particularly challenging to find in the rounded shapes. Inversely, a few Modern California pieces were produced on the angled shape. The company scaled back the available colors in later years, producing pieces only in blue, pink, turquoise and yellow. Early California finally disappears from company price lists by 1950.

Like many Vernon Kilns lines, Early California shares shapes with other dinnerware lines – in particular, the disk pitcher, tumblers and butter with Ultra California. Many lines, especially in the 1950s, often include a mix Montecito, Ultra, and San Marino shapes. Montecito shapes were also adapted in the 1950s for the plaid lines and Brown-Eyed Susan patterns. More than any other dinnerware manufacturer, Vernon Kilns mastered reusability in common dinnerware shapes across a spectrum of patterns until the plant closed in 1958.

Other notable patterns on the Montecito shape include sought-after hand-painted designs by Harry Bird and Gale Turnbull. A ruffled variant of Montecito, called Coronado, was launched in the mid- to late-1930s as premiumware, sold at gas stations and by redeeming grocery store coupons.

I purchased this fantastic mixing bowl set in original box from the collection of Bill Stern in 2020. 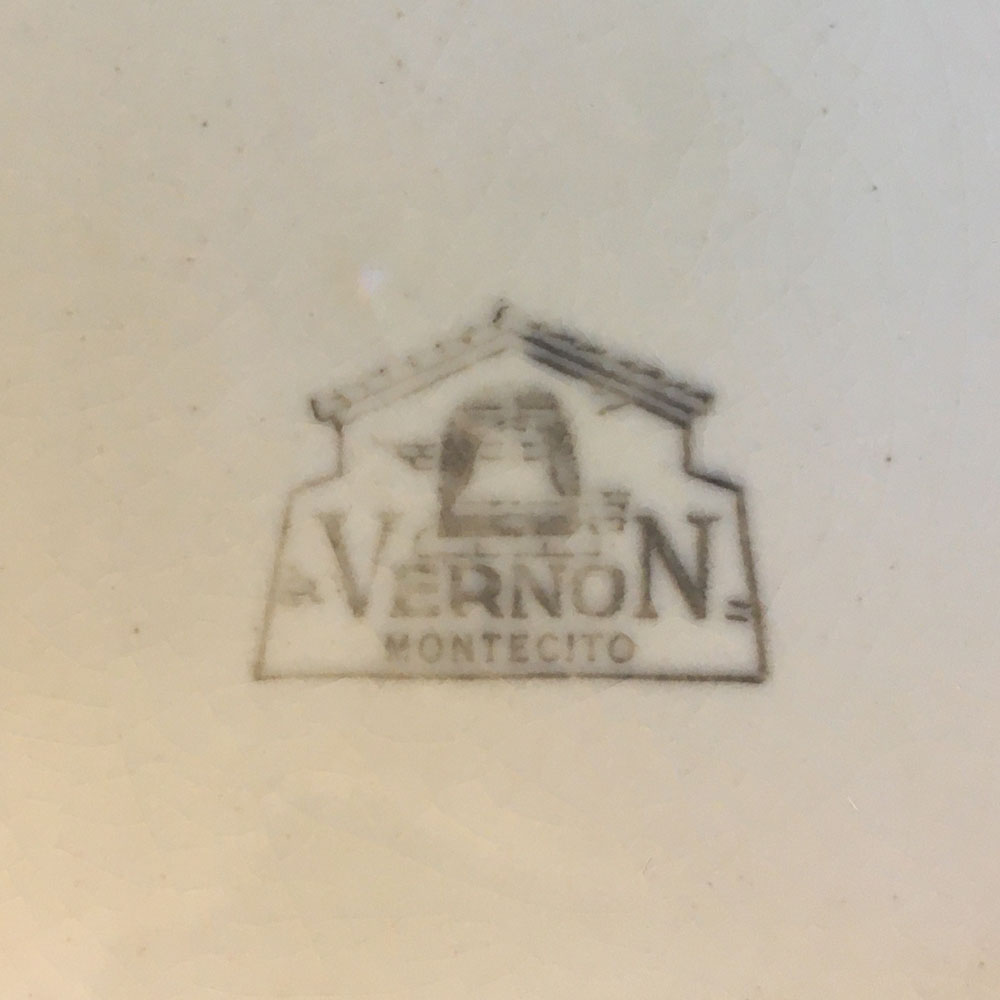 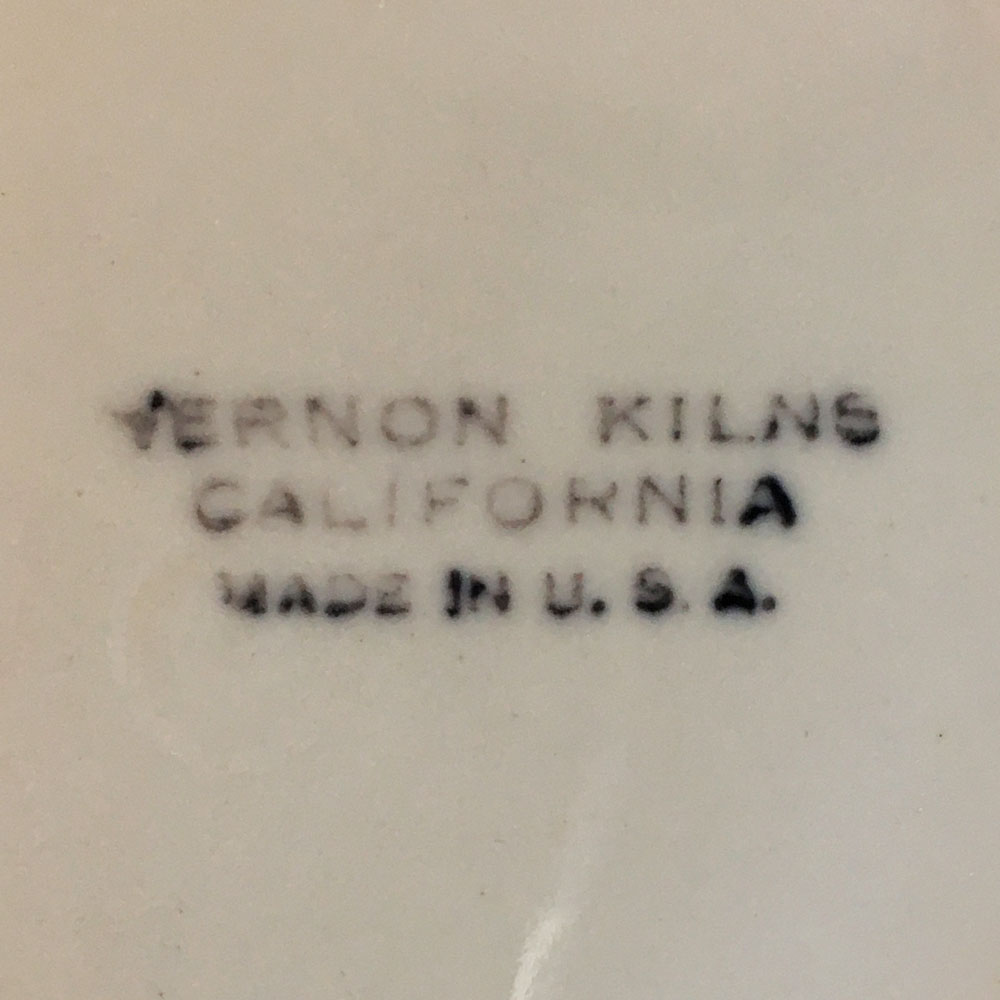 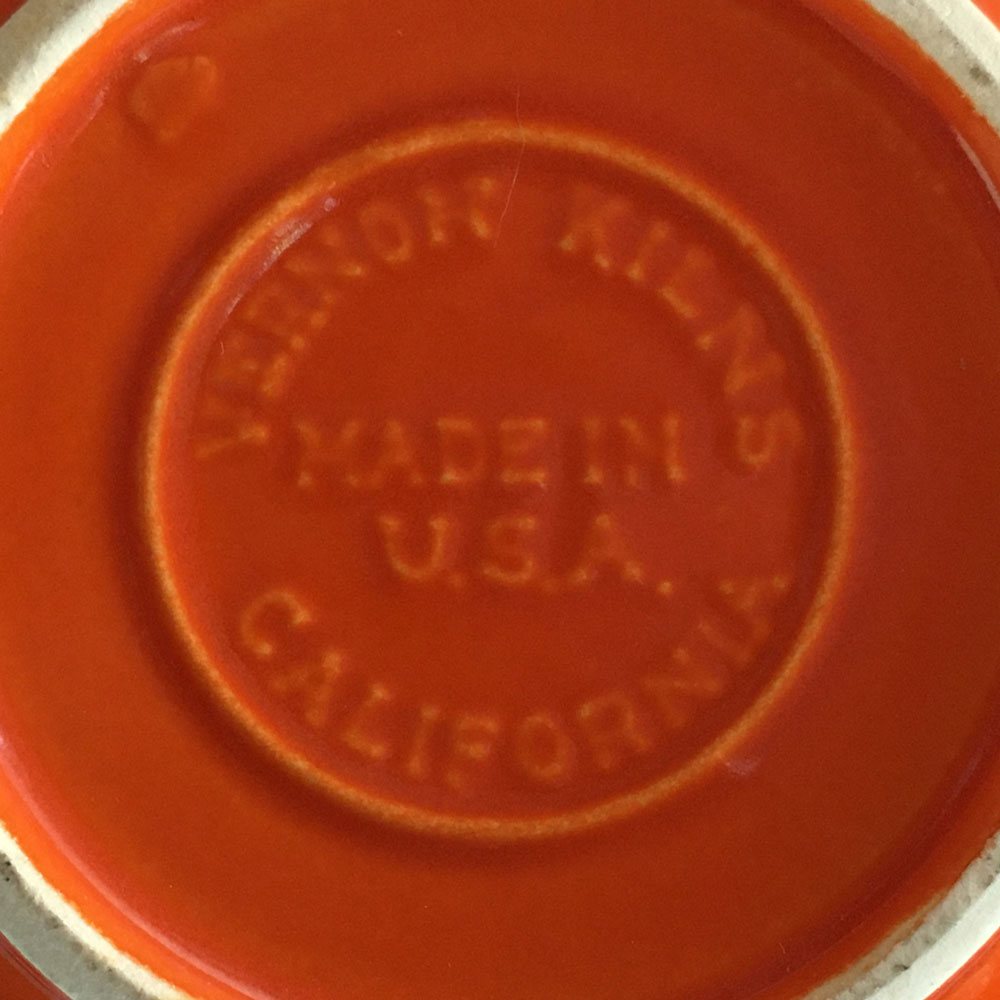 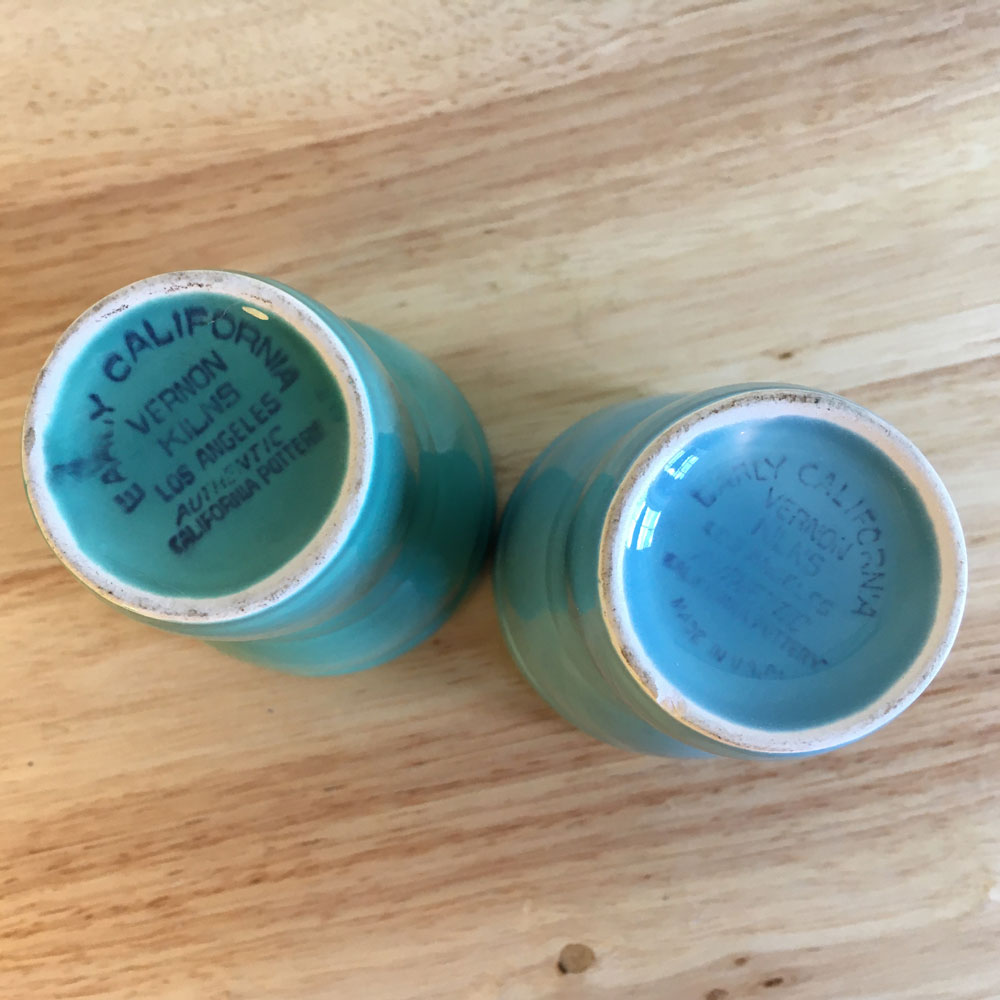 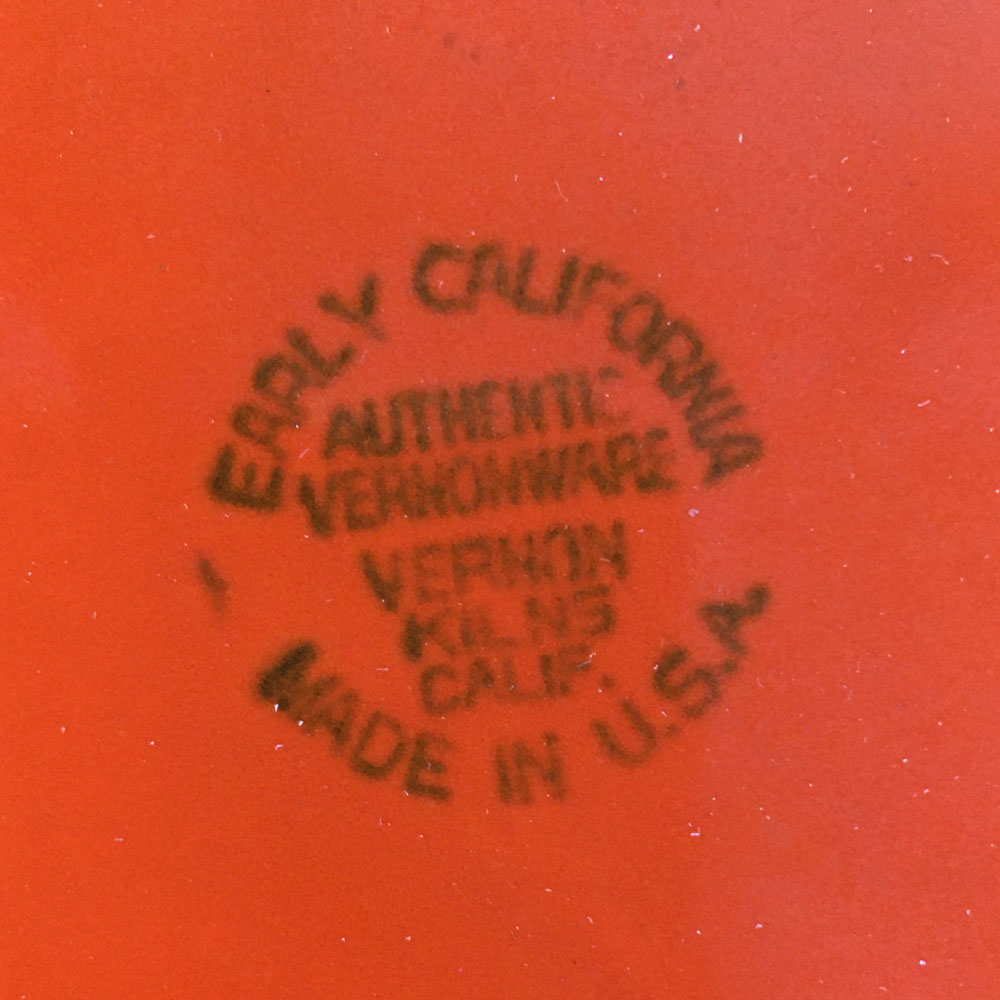 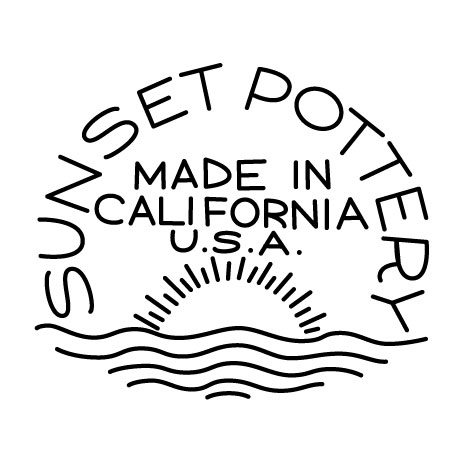 The Sunset Pottery backstamp has been seen on several Early California pieces. During the 1940s-60s, many pottery manufacturers white-labeled their dinnerware lines for large department and catalog stores like Sears and Montgomery Ward. Since no company records exist, it’s impossible to definitely state why and when this mark was used, but pottery marked as “Sunset” is more commonly found on Vernon’s San Marino (i.e. California Casual) shape in the early 1950s.