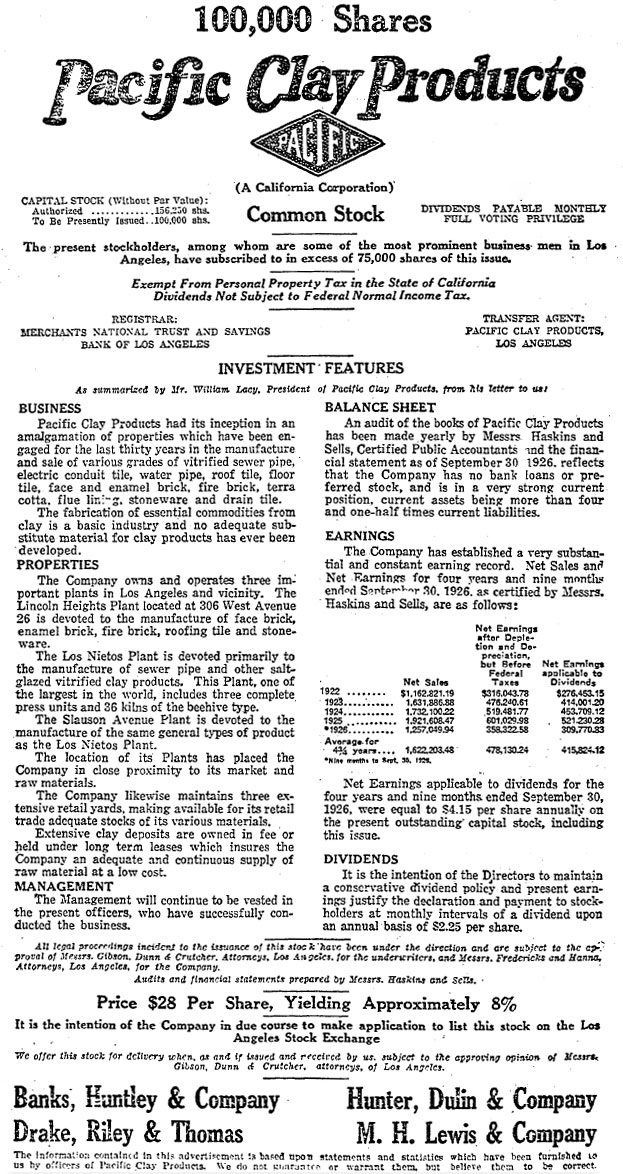 Buoyed by the Southern California building boom, Pacific Clay rapidly expanded their production capabilities in the early 1920s, including the development of new manufacturing facilities. In 1926, Pacific issued stock and remained a publicly traded company until the mid-1960s. At the time of the stock offering, Pacific’s primary produced included sewer and water pipe, electrical conduit tile, roofing tile, brick and stoneware. Their manufacturing footprint included three plates in the Los Angeles area with an annual capacity of around 90,000 tons of finished product. The company also had the benefit of owning extensive clay deposits in the Alberhill area of California.

Chief interest in financing integrating $17,550,000 announced for offering in this market today is centered in an issue of 100,000 shares of no-par-value common stock of the Pacific Clay Products Company, sponsored by a banking group comprising Banks, Huntley & Co., Hunter, Dulin & Co., M.H. Lewis & Co., and Drake, Riley & Thomas. The stock, carrying full voting privileges, is priced at $28 a share, to yield approximately 8 per cent. The business of Pacific Clay Products Company consists of the manufacture and sale of various grades of vitrified sewer pipe, electric conduit tile, water pipe, face enamel brick, firebrick, terra cotta, flue lining, stoneware and drain tile. The company is one of the oldest established industrial concerns of Los Angeles county, being an amalgamation of properties that have been engaged in the industry for the last thirty years.

Adequate clay deposits, owned in fee or held under long-term leases, insure the company an adequate and continuous supply of raw materials at low cost, the bankers state. Three important plants are operated, two in Los Angeles and the other at Los Nietos. The lastnamed plane is one of the largest of its kind in the world, having three complete press units and thirty-six kilns of the beehive type. Three large retail yards are also maintained in strategic locations.

It is the intention of the directors to maintain a conservative dividend policy, and earnings are considered to warrant the declaration of dividends on an annual basis of $2.25 a share. Net earnings for the four and three-quarter years ended September 30. Last aggregated $1,975,165.58 equal to more than $4.15 a share on the present outstanding stock.